After a busy day yesterday in class we were due to meet the Cham gi Wadu community steering committee. We sent the transport to pick them up after breakfast, which gave us time to do a bit of admin work. Worryingly, I am still waiting on the University of Brighton Finance Department to authorise payments for the safari we aim to take at the end of field-trip. Students paid for this on the 10th January and 10 days later we are still waiting. I am assured that it will be authorised and passed for payment soon but it is worrying as I have much to organise at this end and our safari operator is in Nairobi 8 hours away. I am also waiting for the money my first year students collected for the Biwati Orphanage through Just Giving last year to be processed. As I am just about to meet the folk who run this orphanage it is a little embarrassing although much of the delay for this was caused by Rongo’s administrators…..nonetheless it is me who has to explain.

At 11am the 12 strong steering committee arrived and were so delighted to be with us again as I was with them. I recognised the delegates and even remembered the self-help groups they are from – so perhaps old age hasn’t caught me just yet! 😉 I quickly explained the delay in transferring the funds to Biwati to the 2 Janes (the drivers of this community group and responsible for the orphanage) – they were very understanding. After a series of brief round table introductions – community people and students are so much quicker at this than academics – and my rather clumsy attempt at greeting and welcoming them to the session in the Luo language (which they appreciated) it was down to business. Knowing they had recently had a community meeting to discuss the project I invited them to give us a report from the meeting. 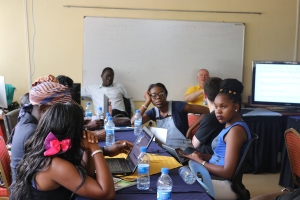 This report gave us both food for thought as a collaborative partnership and great joy. It was stated that in their outreach work among the community groups there was enormous support for the idea of building a community radio station. The obvious benefits for improving community communications such a radio station could bring through knowledge sharing and access to relevant and contextualised information across many areas of community life has been readily understood it seems. However, it was said that there was some concerns, perhaps impatience is a better word, about the time it was taking to be implemented. In response to this last point I explained (again) that there are many stages to go through before the community was fully mobilised to build and operate a sustainable community radio station. I also explained (again) that we are neither a charity nor an NGO with ready streams of funding. That all monies raised towards this initiative were raised by student fundraising efforts; the support of colleagues at the University of Brighton and the friends and families of participating students. I suggested that the time it takes us to raise the 3 million Kenyan Shillings (£20K) to build a solar powered radio station would provide time for the essential community outreach and mobilisation activities to ensure both community engagement and commence capacity building and training activities.

This honest and open exchange of views was clearly appreciated and my message was understood by the steering committee. Of course, it is less challenging to simply raise funds, parachute a radio station into the community and let it fend for itself but in my community communication experience (circa 35 years as a practitioner and 25 as an academic) such initiatives are usually doomed to fail (my PhD thesis is available upon request ha ha ha). At this point we moved on to discuss our activities for the next 2 weeks. Last year we undertook a needs analysis of various subsistence self-help groups (the video is available at https://www.youtube.com/watch?v=BmXjcVkmsCk). This year we plan to conduct a community communications asset mapping exercise. From both research exercises it is hoped that a strategic action plan will begin to emerge.

The rest of the morning was spent in a brief introduction to community asset mapping and how we would go about this. Organising them into breakout groups for a participatory learning workshop (PLW) participants were asked to reflect critically on their understanding of mapping and the geography of community before considering how communities communicate with one another in Kenya and what community radio’s role might be in this. A fascinating discussion in the groups ensued, which I tried to facilitate going from group to group before some really interesting points were raised back in plenary. I had students taking notes of all these sessions and it is my intention to write these up as co-author/co-created papers/presentations at a later date.

After lunch, the afternoon, which was to be a brief session, ran into a few technical problems – not uncommon in community technology projects. I had asked Rongo to test the geo-coding functions on their phones prior to our arrival but somehow this slipped between the cracks. So when we got to this point it turned out that the community only had one smart phone (without a battery) and the UK party had a range of technical problems (mine being O2 telling me my android was unlocked when it wasn’t). This left the Rongo students, all of whom had android smart phone but which appeared to interact with google maps in ways different to ours. Although this caused me a few problems, I knew I had purchased a mobile modem for fieldwork, so despite a little embarrassment I wasn’t really phased and moved on to show and explain the draft community asset map I had produced using data we collected last year and Skype conferences since then. This done, we decided upon a plan of action for next week and called the session to a close. The community went away excited at the prospect of the forthcoming collaborations and for our students the day had brought an element of reality to their CM4K experiences.

The weekend will be spent in a more relaxing mode and I’ll write about that later.