Groups were allocated today which meant our group didn’t get the workshop they wanted. Charlie took charge and we eventually headed out to a Sugar Cane farm to interview the owners.

We got there, and it looked like a scene from Harry Potter (no shame) the Weasleys house surrounded by fields of crops.. We walked through to some tin shacks and found the owner who seemed uncomfortable to talk to us, but then his aunt came out of literally thin air and gave us a much more indepth interview, of which I cant tell you about as it was entirely in another language.

Regardless,  while the interview was going on I was heavily distracted by almost being killed by a dog and then I saw TINY PUPPIES . TINY. TINY. PUPPIES. 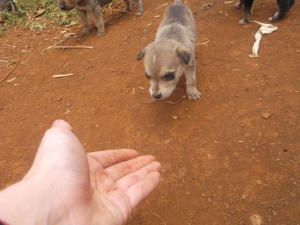 We gave the sugar farm some money so they could buy soap and water and in return they ripped up some sugar cane from the ground and gave it to us.

Our group decided to just get on with the work we set them and began translating and giving voiceovers.

We headed to a local school where they showed us traditional Loar singing and dancing. I really really enjoyed this and the history behind it.

This day was spent complaining and being heavily unorganised. Eventually we decided the Rongo students should concentrate on Sugar Cane Farming and the three Brighton students will make a video on the school.

I think it all ended pretty well, all the groups did an amazing job and the videos/audio were all so much better than Kenyatta