After an intense 3 days at Kenyatta University we were looking forward to a change of pace with the Focus Youth Initiative Chapatti Forum. I was particularly looking forward to meeting my Kenyan son and daughter in-law and my Kenyan granddaughter of 7 months little Taji. We were greeted by my adopted son Kris (it was so good to see him after 2 years) and arrived at the day orphanage run by Focus to a warm greeting and were put to work immediately chopping cabbage for the stew and making chapattis. The students had great fun doing this and there are lots of pictures floating about. I will try to add some here later on if the connection holds. I got stuck into the kneading and rolling of the dough (because I am big and strong….or so I was told before the guy left me to my own devices) 😉

The rest of the students were enabling the locals and the children to familiarise themselves with the equipment and everyone was enjoying the day and atmosphere of celebration. Children love chappos (so do I!)

After a while Kris’s wife, Maureen or little Mo as I call her, arrived with baby Taji……I’m afraid the students got to see the softer side of me as I was reunited with mo and saw my adopted granddaughter for the first time…….I admit I had to stifle a tear but she is an absolute cracker and eventually just before we left for the day she gave me the biggest of smiles……heart melting! 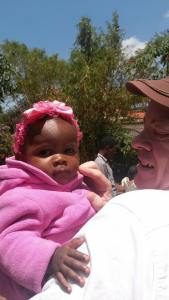 Unfortunately, 3 of our party were affected by the sun so I decided to accompany them back to our apartments to check whether they required medical treatment – which gladly none of them did! Alex, who was among the walking wounded, was least poorly and so stayed with the other two to be on the safe side. Things would have been fine had we not got stuck in another Nairobi traffic snarl-up which meant I arrived back at the dying embers of the festivities and was immediately called upon to ‘say a few words’…….again! All in all I think most of the students enjoyed themselves, although it was very hot and I think one or two more would have appreciated leaving just a little earlier. The day at the orphanage was a good reminder of the realities of poverty in parts of the world, something they were to experience at the ‘Stories of our Cities’ exhibition but more of that later.